Today’s interview is with Julian Morgan

I’d like to mention two, if I may. First up, Thucydides I.22, where an astonishing insight reaches forward through centuries of human achievement. Every time I come back to it, I am amazed at the clarity and understanding both of the writer’s own mission and of humanity in general.

My second text is Horace Odes III.30, where the poet talked about establishing his own monument and placed his personal achievement in the context of a long history going forward. It’s something we can all aspire to, even if we won’t all achieve it in the same ways.

Both writers seem to understand that they should still be providing wisdom and comfort in these strange times.

When did you first come across these passages?

I first met the Thucydides passage in the early 1970s, when the wonderful James Eggleshaw taught me at Pocklington School. Once I got to Bristol University, I realised how lucky I had been to have been taught so well by him and I always retained a fascination with the history of the Peloponnesian War.

I suppose I must have met Horace quite a few times along the way but the stand-out moment with exegi monumentum was when I was working on the Horace Trail CD-ROM, originally commissioned by OUP for first release in 2002. The project involved me visiting pretty much every location mentioned in the poet’s body of work, so the idea of Horace’s monument became very real to me at the time. I came to love his authenticity, modesty and sense of place in the world.

Can you tell me a bit about these sources and their contexts?

The passage from Thucydides is set at the start of his history and explains why he thinks his account may be of use to future generations, as he realises that patterns of human behaviour will be repeated in the future. He sees himself as creating a sort of user manual by which we might interpret future events. It’s extraordinary how true this actually is in places, as for instance when he writes about the plague and its effects on society in general. He also talks about the difficulty of establishing an accurate record, given the distortions of memory or bias. Fake news, anyone?

Horace’s poem was originally set to be the last one of the three books (though of course, he added a fourth one later). He is talking about his work and about how he created it to be a lasting memorial of himself which would outlive even the pyramids. It’s inspiring as a writer to think this might be the case and that we could in some way avoid a part of death. In the early days of using Perseus and looking at frequency of word usages, I uncovered that the name Libitina is very rarely used in literature and I began to realise how unusual some of the words of this message were.

What is it about these sources that appeals to you most?

The fact that both texts have been proved to be true in such powerful ways. If studying Classics is just about dead people and what they left behind, then why bother? In truth, it’s the fact that people from these times can still speak clearly to us today which matters most.

Listening to the Rolling Stones is helpful, as are my daily walks with my beloved dog Ursa, often after a tootle about in my recently self-restored 1968 Morris Minor. Walking with two grandsons through our beautiful Yorkshire countryside is pretty uplifting too.

Julian Morgan is the author and publisher of the Imperium Latin Course, which has been downloaded free of charge by thousands of users via TES Resources. For details, see http://www.imperiumlatin.com/

Julian loves the challenge of making something entertaining out of his classical knowledge: he writes and publishes a range of puzzle books on classical themes, including Latin, Greek, Roman Britain and the classical world.

His most recent publication was written during lockdown and is a collection of 100 puzzles written entirely in Latin, called QUARE ID FACIAM. The title says it all, really: the book’s aim was to provide comfort classics for the author as well as his readers!

Julian tweets at this link: @imperiumlatin 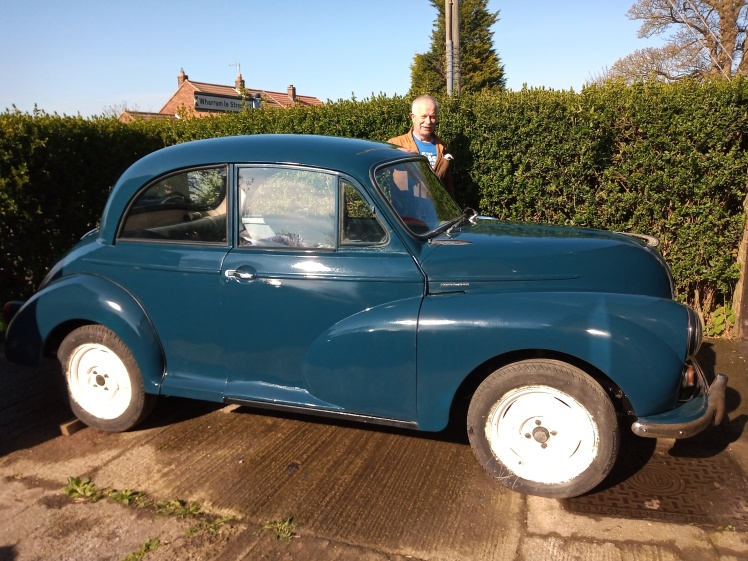