I’ve been finding the internet a bit depressing lately. In my weekly round-up of Classics-related blog-posts, I’m seeing a growing obsession with what Classics is, who should be in it, and why the words we use to describe it are so important.

These are essential debates to have, of course. Classics is always, by its very nature, open to accusations of being irrelevant to the modern world; and if we don’t question our assumptions and expand our boundaries, we deserve those charges. But the process isn’t always enjoyable.

The mud-slinging, in-fighting and general turmoil don’t make for a nice online environment, and it seems to be getting worse. However, there have been some bright spots in the last week.

One was International Women’s Day, which has produced all sorts of great stuff on social media, including shout-outs to female academic mentors and information on women in antiquity. If you’re interested in the latter, I strongly suggest taking a look at this list of women authors from the ancient world: it’s eye-opening. And for those interested in how people are using online tools to increase the visibility of female classicists online, do check out this article which has just been published by Victoria Leonard and Sarah E. Bond (there’s also a pdf available here).

I wish I could say that I’d had an inspiring female academic mentor; but during my seven years at university studying Classics, every class I took (except Beginner’s Greek) was taught by men, and all of my supervisors, examiners and personal tutors were men. I once attended a small historiography conference at which the only woman present – besides myself – was the tea lady. Having come from a girls’ school in which gender equality was simply taken for granted, it was a jolt for me to see so few women in influential positions. That’s one of the reasons why it’s such a pleasure for me, today, to work with the Classics Department at The Open University, because there the picture is very different!

I didn’t have any female mentors – but my decision to study Latin at university was inspired by a woman whose name I can’t even remember. She was a PhD student teaching Latin at my school for a few months to earn some extra money. She used to grin and shout and wave her hands, and throw her lesson plan away if she ran into a sentence that caught her imagination. That was the first time I’d ever seen anybody treat Latin as something other than a chore or a puzzle. So I’d like to send her a big thank you – whoever she is! She made a big difference in my life. 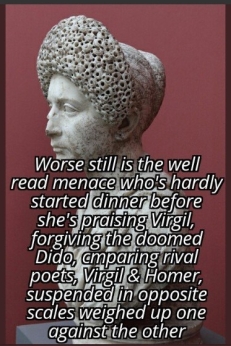 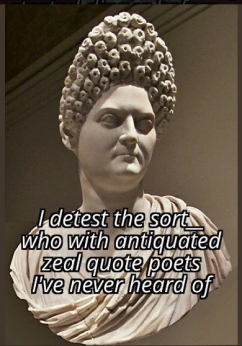 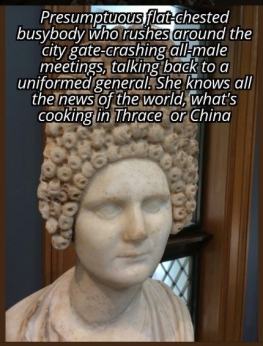 L.J. Trafford pays tribute on Twitter, for International Women’s Day, to the educated and forceful women who annoyed Juvenal.

This week we also had World Book Day, which I find a bizarre and slightly disturbing concept. Just one day out of the year dedicated to books? Whoever came up with that idea certainly never visited my house. But it prompted a lot of very nice book pictures on social media, which always makes me happy – so maybe I can tolerate it after all.

Unfortunately one complication of World Book Day is that it causes small children across the globe to dress up, inflicting on their parents ridiculous amounts of stress. At my son’s school the theme was Heroes and Villains, so yesterday the playground was full of miniature Hulks, Thors and Elsas. I did my best to persuade my son to go to school as Odysseus (Odysseus being the only classical hero that he finds remotely interesting), but apparently Odysseus is much less cool than Ash Ketchum.

This week’s links from the classical internet

On the aftermath of the SCS incidents – History From Below

… and an official statement – Society for Classical Studies

Socrates in love – The Conversation

The invisible women of history – Pursuit

Lessons from the fall of Rome – OUP blog

Thoughts on Classics – The Archaeology of the Mediterranean World

The women of Rome – Time