Today’s interview is with Andy Keen

There are several texts which I have felt a connection to over the years – Plato’s Symposium, for example, and in particular Aristophanes’s speech about soul-mates… Sappho’s poetry which I first taught to an Upper 6th Greek class in 1999, and am now coming back to teaching more than 20 years later, this time in translation to an Upper 6th Class Civ group… But the one that I keep coming back to is Sophocles’s Oedipus the King.

When did you first come across this play?

I read the Oedipus at school, and then covered it again in Greek with the great Don Fowler, who taught at Jesus College, Oxford and died far too early not long afterwards. I first taught it in the early 2000s to a brilliant Lower 6th Greek group, who went on to abridge and perform the play (in English) later that year. I directed them that year, and three of them went off to do Classics at university – Miriam (who played Oedipus) to Oxford, Zara (who played Jocasta) to London (she’s now a lawyer in Texas) and Hannah (who played the messengers and Tiresias) to St Andrew’s (she’s now running a fantastic theatre company in Bristol called Insane Root). I’ve taught bits of it, in Greek and in translation, several times since. 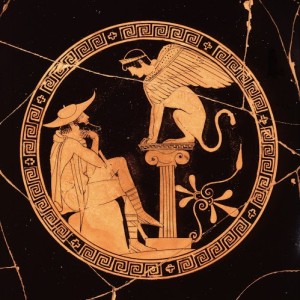 Can you tell me a bit about the play and its context?

It was first performed around 429 BC, in the aftermath of the plague in Athens. It’s one of three plays in the so-called ‘Theban trilogy’ by Sophocles, and one of only seven of his plays which remain in their entirety (out of around 150 he wrote). It was used extensively by Aristotle in his Poetics as a tragic paradigm for several reasons.

What is it about this tragedy that appeals to you most?

Now, hear me out – it’s not traditionally thought of as a “comforting” play; I’m aware of that! But I think the path to comfort is through self-knowledge, and the play is all about that, I think (amongst other things). It leads me to connect to an object and an inscription, as it happens. The object is the omphalos in Delphi, enormously significant in all sorts of ways to the ‘Greeks’ and in many ways (both symbolic and more unsettling) to Oedipus. The inscription is the words “GNOTHI SEAUTON” (know yourself) inscribed in Delphi – which is the place Oedipus’s fatal prophecies came from, and the advice which ended up being his downfall.

The final lines of Sophocles’s play are “Call no man happy until he dies, free of pain at last” (in Robert Fagles’s translation). It sounds a wholly miserable thought, but I find it strangely comforting. It’s not, to me, about being happiest after death, but rather about not being certain until life has been lived. The word ‘happy’, of course, is a problematic translation in some ways, as the Greek word ‘eudaimon’ is more about the life allotted, and one’s fortune – Oedipus, after all, thought himself ‘eudaimon’ but never really was. Just as you don’t know if you’re happy until you’ve lived out your life, so you don’t know you’re unhappy until you see how it all pans out. Don’t judge people’s happiness on how they seem – those who seem unfortunate can have the happiest of lives: those who seem to be thriving can be suffering inside. It all puts me in mind of Solon’s reply to Croesus in Herodotus’s Histories – happiness is not about the outward signs of success, but the quality of the life you’ve lived, the love you’ve shown, and the dignity of your death.

“I’ve taught Greek tragedy and comedy (with delight), Roman history (reluctantly), Ovid, Virgil, Homer, Sappho, Herodotus, and recently the new GCSE Classical Civilisation syllabus. I travelled through the Greek islands, northern Greece, Bulgaria, Romania, Spain, Portugal, Germany and Croatia on a Classical Sabbatical in 2017, having walked Hadrian’s Wall in 2015. I’m now more than half way through visiting 123 selected Roman sites in Britain. All of these things can be found on my blog: http://keenerclassics.wordpress.com“