Today’s interview is with Michael Loy

The Nikandre kore — I am unashamedly in love with this sculpture. She is modest, discrete, and exceptionally beautiful. At only 0.17m deep, she is (rather unfairly) called ‘plank-like’. Her poor face has all but eroded away too. But she has an important story to tell both for the history of ancient Greek sculpture and about ancient society more generally.

When I worked at the Museum of Classical Archaeology at Cambridge, a plaster cast of Nikandre stood across from where I would sit at the enquiries desk. She was also the first sculpture that visitors saw when they came in the door, quietly welcoming them in. Now, the original marble statue is my neighbour, a few streets away in Athens at the National Archaeological Museum. We’ve got to stop meeting like this…

I think I met Nikandre in the first week of my undergraduate degree, when I checked out of the library James Whitley’s The Archaeology of Ancient Greece. I remember being captivated by ancient Greek material culture, and by the history of its discoveries. I read the book cover to cover, then went out to buy my own copy when the library loan was over. In a neat ring-composition, my university education ended with James Whitley as external examiner for my PhD thesis. 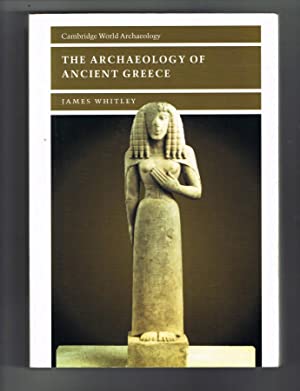 The statue on the front cover of Prof. Whitley’s book is the Auxerre Goddess, a close relative of Nikandre’s. This particular statue was found in the store cupboard of the Museum of Auxerre in the early twentieth century (!), and is stylistically very similar. They both stare ‘frontally’ outwards, they wear heavy chitons, and their braided hair falls evenly across both shoulders.

[Here is a 3d scan of the Nikandre kore plaster cast (from the Museum of Classical Archaeology), created by me in late 2018.]

Can you tell me a bit about Nikandre and her context?

Sculpted around the mid-seventh century BC, the Nikandre kore is made from marble that comes from the island of Paros. She was dedicated on the nearby island of Delos, given as a gift to the goddess Artemis. Greeks of the Archaic period would sometimes set up statues like these as votives, thanking the god for something that the dedicator had received or maybe asking for something else in prayer.

On Nikandre’s left leg, there is a neat three line inscription that runs back-and-forth. The first line is written left-to-right, the second is written right-to-left, and the third is left-to-right again: this is a ‘boustrophedon’ (‘ox-turning’) inscription, so called because the lines of text weave one way and then the other just like an ox ploughing a field. Roughly translated, the inscription says: ‘Nikandre dedicated me to the goddess, far-shooter of arrows, Nikandre, the daughter of Deinodikos of Naxos, distinguished among women, sister of Deinomenes and wife of Phraxos.’

What is it about this statue and its inscription that appeals to you most?

The Nikandre inscription is written in a ‘local’ form of the ancient Greek alphabet (known as the ‘Naxian’ alphabet), and so this inscription gives us evidence of the sorts of letter shapes people on these islands would have used and recognised. The text also tells us that ‘Nikandre dedicated me’ — it is actually the statue itself that is speaking. Locked down, and kept away from friends and family, this is a comforting sentiment to hold on to: objects themselves speak to us and tell us their stories.

Art historians put Nikandre at the start of a story in which over the next 150 years the artists of Archaic and Classical Greece began to sculpt kore statues that were lighter, fleshier, and a little more lifelike. But Nikandre is more than just a bookend to me. Made from Parian Stone, commissioned by someone from Naxos, and dedicated on Delos, Nikandre shows how these three Cycladic islands were tightly networked in the seventh century BC. She is truly cosmopolitan: a real material girl, living in a material world.

I enjoy waking up very early to go for very very long hikes. Double points if sunrise is involved; triple points if the hike ends down by the sea with octopus for lunch.

During lockdown I passed the time jamming on my saxophone. And —like every other ancient historian around— of course I played through Assassin’s Creed Odyssey…

Michael Loy is Assistant Director at the British School at Athens, where he co-ordinates the undergraduate and graduate teaching programmes and manages the hostel for visiting researchers. He is a Classical Archaeologist with a particular interest in GIS. He is currently writing a book called Connecting Communities. Economic and Political Networks in Archaic Greece— spoiler: the Nikandre kore will be in there!

The British School at Athens has instigated a whole range of digital initiatives to keep in touch with the research community during this age of physical distancing. Be sure to check out www.bsa.ac.uk or follow on social media for more details. 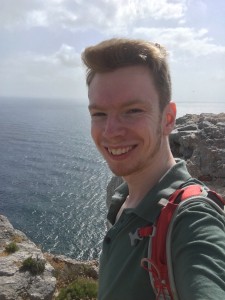