Today’s interview is with Jo Ball

One of the things I have most enjoyed going back to during the lockdown has been Roman letters, particularly military and family letters, such as the Vindolanda tablets, the Vindonissa tablets, and papyri from Egypt. They are such chance survivals – usually surviving for the sole reason that they were thrown away – and yet they give such an amazing insight into the daily lives of ordinary people (both military and civilian) in a way that more formal historical sources just don’t. So since the lockdown I have been working my way through various databases of letters, just reading through them – in some cases, it is almost like reading snapshots from (very good) historical fiction.

When did you first come across these letters?

Can you tell me a bit about the letters and their context?

The letters tend to survive in pits and ditches where they had been thrown away – none of them were preserved because they were important, which for me makes them much more important than the things that were deliberately saved! They have largely been found during archaeological digs in settlements and (less often) military bases, where they had been thrown away after receipt. They were exchanged between people who lived at often quite a significant distance from one another, and provided a vital way for people to stay in touch across the miles – probably a reason why I have found them so helpful to read during lockdown!

Many of the letters were written by public scribes rather than the letter-sender themselves – literacy levels in the Roman world are difficult to reconstruct, but most suggestions hover around 10% literacy, perhaps 20% in some areas (although many more people would have low functional literacy e.g. could recognise a few words) – and may well have been read out to the recipient.

What is it about these letters that appeals to you most?

What I love about these letters is the humanity that they reveal, and the individual voices of ordinary people which in most cases are completely lost from the ancient world. They are often about fairly mundane matters – but at the same time, things which were of great importance to the writer. A lot of the themes would be familiar to people today – to soldiers and the families they are parted from, or anyone who lives a distance away from their family & friends.

A well-known example (but one of my favourites) is this birthday invitation from Vindolanda, sent by Claudia Severa (the wife of Aelius Brocchus, the commander of an unidentified fort near Vindolanda) to her friend Sulpicia Lepidina (the wife of Flavius Cerialis, commander of Vindolanda) inviting her to Severa’s birthday party on September 11th, sometime around AD100. She asks Lepidina to come to make the day more enjoyable – the tone of the letter suggests that the two women saw each other fairly often. It is a very informal letter, and sends best wishes to her friend’s family from her own. The majority of the letter is written by a scribe, but the last 4 lines are in a different, much less practiced hand, which is probably Severa’s own handwriting – if so, this makes it one of the earliest known examples of female handwriting from anywhere in the world. The sense of friendship that comes through this letter is wonderful, from two women living in a very male and military environment (there would be few other wives there), taking every opportunity that they could to socialise together.

Another particular favourite is Vindonissa tablet 40. It was written by an unknown soldier back to his comrades in his cohort (military unit) after he had been sent on leave (something which was not common as standard, at least according to the formal sources, although decent commanders seem to have recognised the advantages of letting their soldiers have a break when necessary). While the soldier is clearly happy to have a break from his military service (‘Finally on vacation! I am completely free from military life!’) he clearly misses his fellow soldiers, asking twice that they write to him with any news from the camp, and asking that they don’t forget him. I find this a particularly nice letter because it shows the bonds that built up between Roman soldiers, and reminds us that they were people beneath the intimidating uniform and brutal battlefield tactics. We have here a man – we don’t even know his name – who even as he went on leave wanted to ensure that he kept in touch with his comrades.

A third and final letter that I love is one sent by a soldier named Aurelius Polion, a soldier in the Roman army who was originally from Egypt but posted elsewhere, probably Pannonia, back to his family in Tebtunis. In it, Polion complains that he has written six letters back to his family but has not received any reply, leaving him to worry about the welfare of his family – from such a distance, he would have no way to know whether his family was still alive or not, and therefore whether it was misfortune or lack of consideration that held up the reply. He is clearly wondering if he has done something to upset his family, and heads off a few of what were clearly causes of tensions in families where one member became a soldier – he makes it clear he has not asked them to send too many supplies to him (soldiers frequently asked their families to send both basic equipment and treats to them), and seems to want to reassure them that his joining the army was not a rejection of his family. He adds that he will try to obtain leave to visit them as soon as he receives a letter; we don’t know if he ever did.

What is clear is that Polion is desperate for news from his family, showing that even though he was far from them, and part of a new military community (that, as the above letter shows, could produce very strong bonds of friendship), he still had a degree of homesickness. The situation of one party in a written correspondence being more keen than the other will not sound unfamiliar to many people in the modern day (sadly, in my childhood pen-pal days, I was probably the one who forgot to write as often as I should have…), and the desperation to hear from beloved and missed family is one that I think many of us sympathise with, maybe a bit more now than we ever have.

There are countless other examples of letters like this, exchanged by people throughout the Roman world – millions more have not survived. It has proved a great comfort to be able to read them during these difficult times, and realise that many of our struggles are universal ones – we miss distant family and friends, and lose something when they cannot be part of our daily life and special occasions. We all know we should stay in contact more than we do – something which many of us have been able to address during lockdown. These letters remind us that we are not alone in our loneliness – not just today, but throughout history, we walk in steps well-trodden by those who came before us.

I love to travel (although as much of this is themed around historic sites, I am not sure it counts!) Otherwise, it comes down to vastly over-elaborate cooking, preparing dishes from my far-too-extensive collection of cookbooks – a way to travel-by-proxy when you can’t leave the house!

Dr Jo Ball is an Honorary Research Fellow and University Teacher at the University of Liverpool, offering courses themed around the Roman military, the frontiers and provinces (particularly Britain), and (as something slightly different) the American Civil War. Jo is also a contributor to Ancient Warfare magazine, & slightly obsessed with Twitter (@DrJEBall).

“I would classify myself as a battlefield archaeologist / Roman archaeologist (depending on my mood on the day), and my research interests centre around the Roman army, Roman warfare, and the frontier provinces – my current projects include the treatment of the enemy in Roman warfare, the disposal of the battle-dead, ambushes in provincial warfare, Roman military letters, and the sieges of the First Roman-Jewish War (all very cheerful stuff, obviously!) I love being out in the field, and hope one day to discover a previously-lost Roman battlefield, preferably the site of Boudica’s last battle.” 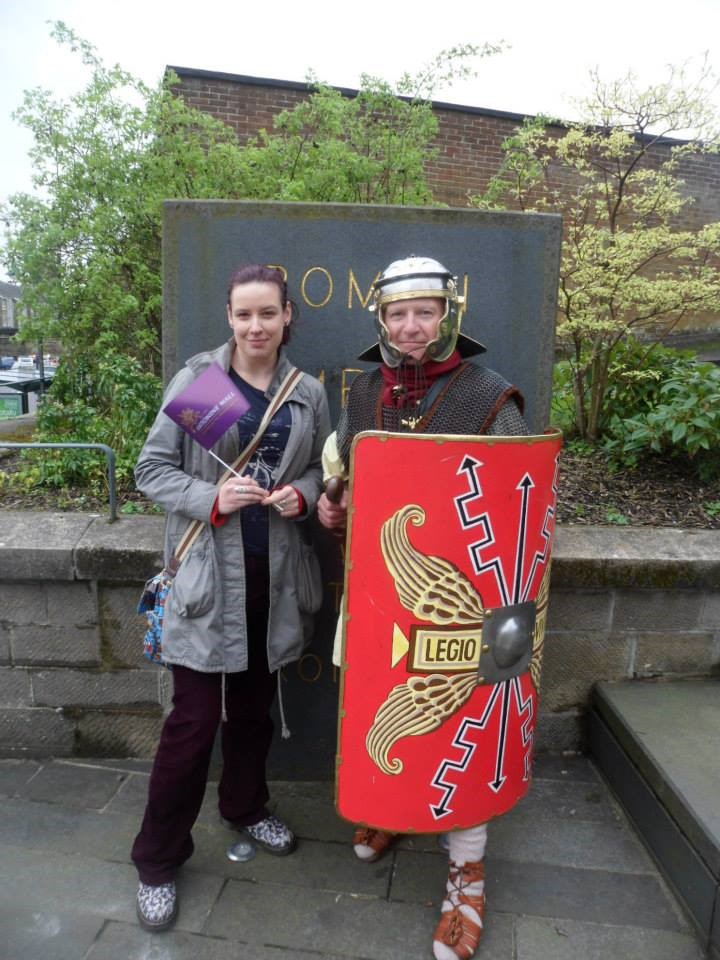