Today’s interview is with Andrew Sillett

At the risk of sounding impossibly weird, I haven’t yet managed to sit down to read Cicero’s letters without becoming completely engrossed in them. I’m not sure that reading them makes me feel better per se, but they do provide an unparalleled distraction (which is sometimes just what you need).

When did you first come across these letters?

There may be a degree of reconstructed memory in this, but I have a very strong recollection of sitting a Latin translation exam in the final term of my first year at University and finding myself confronted with a letter Cicero wrote to his wife from exile, trying to console her (while clearly quite strongly in need of consolation himself). I think this sticks in my mind for two reasons: mostly it’s because I made an absolutely pig’s ear of the translation, but it’s also a result of the fact that, although I was vaguely aware who Cicero was by that point (having come up to Oxford without having studied any Classics at school), I had no idea that any personal correspondence had survived from 2,000 years ago, let alone letters written by Cicero himself. 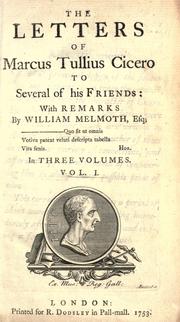 Can you tell me a bit about the letters and their context?

Sure! Marcus Tullius Cicero was a Roman politician who rose to prominence in the first century BC, a contemporary of men like Julius Caesar, the younger Cato and Pompey the Great. Although he did not come from one of Rome’s great families, he rose through the great offices of state and became one of the main players in the last days of the Roman Republic. After his death at the hands of Mark Antony and the future emperor Augustus, people (probably including his freedman Tiro and his best friend Atticus) began to gather together his correspondence for publication to a wider audience.

What is it about this source that appeals to you most?

There are so many individual moments among these hundreds and hundreds of letters (36 books of them survive today!) which I could talk about at length (something my poor students have to put up with every term). But I’ll tell you three aspects that I think make them special:

I watch far too much television. I’m currently reliving Series 3 of ITV2’s Love Island, watching each episode on more or less the same night it was broadcast three years ago. Before that I watched all of the David Suchet adaptations of Agatha Christie’s Poirot, and afterwards I think I’ll run through Sex And The City once again. I’m also marking each new week of lockdown by watching Pierce Brosnan’s final James Bond Film, Die Another Day. I’m on viewing 11 now, and it certainly is giving me unique perspective on the passage of time.

Andrew James Sillett is a Departmental Lecturer in Latin Literature and Roman History at the University of Oxford, and a tutor at St Hilda’s College. He also runs a Beginners Latin club for primary and secondary school children who sing in the choirs of St Giles’ Church. He has published on various aspects of Cicero’s political, rhetorical and philosophical life, and is currently in the process of converting his DPhil thesis on Cicero’s posthumous reception in the early empire into a monograph with OUP.