Today’s interview is with Jennie Baillie

As I’m still grumbling about not getting to Rome in April, images from there always make me feel happy. But as I guess a city is too big a topic for now, I’m going to choose something which is inspired by antiquity, the 17th century sculpture Apollo and Daphne by Gian Lorenzo Bernini. 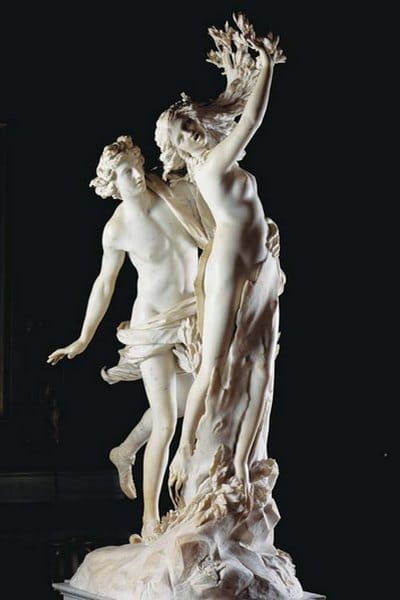 I first came across the sculpture when I was studying the OU’s level 2 module Art and Visual Culture and initially I disliked it. The disorder and soft and intense baroque curves did not sit well with me as I preferred the structure and order found in the artwork and sculptures of the Renaissance. A couple of years later I was studying Ovid’s Metamorphoses as part of the OU’s Myth in the Greek and Roman World module and by chance saw the sculpture in person at the Borghese Gallery in Rome and only then did I appreciate it.

Can you tell me a bit about the sculpture and its context?

The sculpture was commissioned by Cardinal Scipione Borghese in the 1620s and was inspired by the story in Book I of Ovid’s Metamorphoses in which Apollo insults Cupid who responds by shooting two arrows, one at Apollo and the other at the river nymph Daphne. Their reactions are very different as Apollo falls madly in love with Daphne, but Daphne does not return these feelings. She is having none of it, as she is devoted to Diana and has vowed to remain a virgin. Apollo chases after Daphne who shouts out to her father, the river God for help. Turning your daughter into her tree is quite an unusual course of action, but that’s what he does and as Apollo catches Daphne she is transformed into a laurel tree.

‘Help me, Father!’ she pleaded. ‘If rivers have power over nature, mar the beauty which made me admired too well, by changing my form!’ She had hardly ended her prayer when a heavy numbness came over her body, her soft white bosom was ringed in a layer of bark, her hair was turned into foliage, her arms into branches.

And it’s this moment which is captured by Bernini.

What is it about this sculpture that appeals to you most?

The sculpture appeals to me as what put me off about the style initially is what fascinates me now.

It is located in the centre of the room at the Galleria Borghese but originally it was placed near a wall so the viewer had to approach it from behind. That was very clever positioning, as Daphne is hidden by Apollo and only by slowly walking around the sculpture do you get the full effect of the story and the transformation taking place before you.

You can almost see the two characters moving before you, Daphne’s hair flowing out as it turns into leaves, her smooth skin becoming rough bark, and that bad boy Apollo looking very pleased with himself.

Like everyone else, life at the moment is a little odd, I’m working from home whilst trying to home school my children and look after three demanding cats so I try to find little moments of pleasure when I can. I enjoy running, which over the years has been a life saver and I have completed a few half and full marathons, I also like reading and watching Italian crime fiction – Inspector Montalbano is at the top of the list (watch all the episodes on BBC iplayer), but I’ve built quite a collection of dvds and books set in other parts of Italy. I probably take too many holidays, but I love travel (and Italy), and always on the look out for a cheap short break. It’s amazing how much you can fit into two days if you plan it properly!

Jennie is a recent MA Classical Studies graduate of the Open University and her main area of interest is the depiction of identity in ancient Roman frescoes, although she is very partial to Italian Renaissance art. Her ambition is to continue researching and she is working on ideas for a PhD proposal. She currently works as a Marketing and Campaigns Manager in a theatre and that funds the study, travel, running and children! 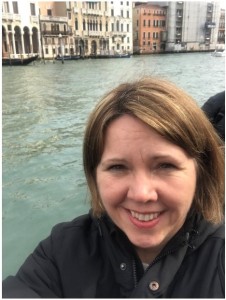