Today’s interview is with Hayley Merchant

For me Trajan’s Column is my classical comfort blanket. A little odd perhaps when you think that it depicts warfare including scenes of torture, enslavement and beheading. But, as I’ll explain, the monument is very special to me.

When did you first come across this source?

When discussing potential topics for my undergraduate dissertation all the way back in 2003 my tutor suggested I look at Trajan’s Column. At this point I had never heard of it. I spent the next two years analysing the buildings on the column and, quite honestly, became hooked.

Can you tell me a bit about the column and its context?

Trajan’s Column sits within the remains of Trajan’s Forum in Rome. It depicts the emperor Trajan’s two campaigns in Dacia (modern day Romania), the first from 101-102 AD and the second from 105-106 AD, against the barbarian Decebalus and the Dacians. The column is one of the best surviving elements of Trajan’s Forum.

What is it about this monument that appeals to you most?

Trajan’s Column appeals to me on so many different levels, from iconographical and archaeological to emotional. In terms of the iconography I personally think the imagery is incredibly beautiful, winding its narrative up around the column shaft. I could stare at it for hours. Emotionally, it holds many very happy memories for me. When I was drafting my dissertation I would print out pages, cut them up and lay them on the floor to review the layout (very old-school cut and paste). At the time we had a wonderful dog called Mabel and I remember her keeping me company through the long hours of writing and, in particular, walking on all of those sheets of paper on the floor without a care in the world. Following submission, the day after my graduation my Mum took me to Rome to celebrate, and as soon as we arrived she insisted we go for a walk. My Mum made out that she didn’t know where we were going and then all of a sudden we turned a corner and there was Trajan’s Column. I was absolutely floored. She had planned it all along.

So in essence, Trajan’s Column isn’t just a beautiful and valuable example of Roman military iconography, but also an archaeological monument with which I have incredibly happy and special memories associated.

All of my interests tend to align with the ancient world, and Rome in particular. I dabble at running, and was due to run the Rome Marathon for the second time in March, but this has now been postponed to next year. I love watching films, and have a particular weakness for anything (no matter how good or bad) based on the ancient world and antiquity, from swords and sandals blockbusters to lesser known gems (The Extraordinary Adventures of Adele Blanc Sec being a particular favourite). I’m very lucky to live on the Welsh border and spend a lot of time with my husband walking our dog Samson in the countryside and on the beach.

Hayley is Head of Collections Care and Management at the Black Country Living Museum and a Trustee for the Clwyd Powis Archaeological Trust in Wales. Hayley’s main interest is the Roman army and iconography and, having left Exeter University in 2005 with a BA in Archaeology, she is now studying for a Masters by Research at the University of Birmingham. Her research topic focuses on the purpose of military iconography during times of stability and instability in the Roman Empire from the first to the fourth centuries AD. And yes, it includes Trajan’s Column! 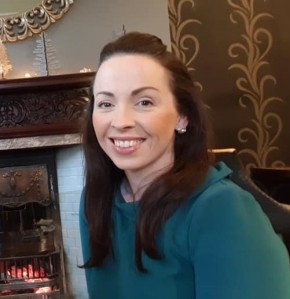