Today’s interview is with Armand D’Angour

This poem by Nicarchus makes me laugh every time. I love the idea of someone coming seventh in a race with six people – and the punchline is fabulous!

When Kharmos, in Arcadia, once entered in a race

competing with five runners, he came out in seventh place.

A curious result, and you’ll be saying ‘How in heaven,

with six men in the race, did Kharmos finish no. 7?’

The reason’s this. A mate of Kharmos, shouting ‘Go, you’re fine’

ran fully dressed around the course, and beat him to the line.

So Kharmos finished seventh, but here’s to his sporting health:

if he had five more friends, just think — he would have finished twelfth.

When did you first come across this poem?

I was writing an article about the ancient Olympics after I composed the Pindaric Ode for Athens in 2004, and it was cited in a scholarly book about ancient sport. I thought I must translate it into verse form, and did so.

Can you tell me a bit about this poem and its context?

Nicarchus was a Greek poet of the 1st century AD, famous for his witty epigrams, forty-two of which survive in a collection called the Greek Anthology. Many of them have a sting in the tail, like this one:

The pall of death hangs on the raven’s wing;

The song of death sounds in the raven’s cries.

But when Demophilus begins to sing…

Not surprisingly Nicarchus was an influence on the Roman poet Martial, who wrote even more stinging epigrams.

What is it about this poem that appeals to you most?

Its humour and irreverence, and the ingenuity of putting the thought into the elegiac verse form.

The thought of a fresh almond croissant and coffee from our local café Sable d’Or cheers me up every time, though I ration myself to weekends. I think the idea actually stimulates endorphins.

“I teach Classics at Jesus College, Oxford, and I live in London NW3. I love all the Classics, Greek and Latin, but have been hugely enthused about my latest subject of research, the philosopher Socrates.  In my book Socrates in Love (2019) I paint a brand new picture of him  – that of a young man falling in love, fighting in battle, and sparring with friends. I’m looking forward to the book being made into a film, but it’s also a piece of serious revisionist history with which I think scholars must engage.” 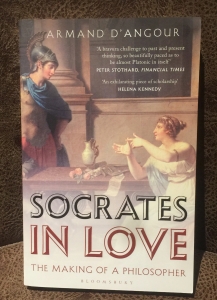 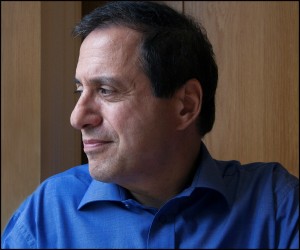