It’s been another one of those disturbing weeks, with classicists taking to the internet to highlight scandals and injustices, and with a full complement of classical-political lunacy.

The Paideia drama continues to rumble on (for those UK classicists who may not have been following, the Paideia Institute is a US-based Latin-teaching organisation which claims to be inclusive – but which apparently has been anything but), with the withdrawal of support from several large organisations. The rumours about Oxford classicist Dirk Obbink’s involvement in the wanderings of certain papyrus fragments have become full-blown accusations and have hit the mainstream media.

On a slightly more frivolous note, many classicists were incensed by an article this week which compared Donald Trump to Tiberius Gracchus – partly because the article didn’t quite have the historical details straight (to put it mildly), but mainly I suspect because Gracchus still has quite a fan club. And then President Trump himself managed to trump all the Trump/Roman comparisons in a speech this week, in which he claimed that America’s ties with Italy go back to Ancient Rome. Finally, Boris Johnson chose to compare Jeremy Corbyn to the two-faced god Janus – which, as many pointed out, was rather an own goal, since Janus is a pretty cool god. 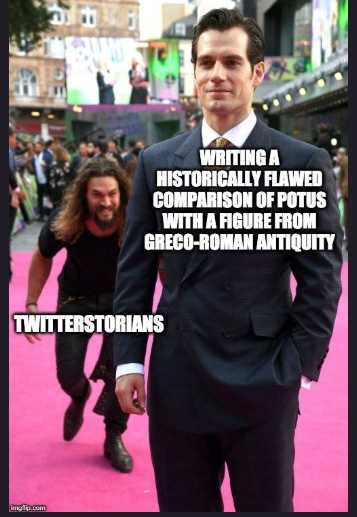 My award for ‘silliest news item of the week’, however, goes not to Boris, or to President Trump, but to a lovely article I stumbled across from the Daily Express, which excitedly announces a ‘Stonehenge breakthrough’ and the revelation of Druid ‘secrets’ in a ‘letter’ by Julius Caesar. Sadly it doesn’t seem that there has been a breakthrough, a discovery of great secrets, or even a letter: it was just a reporter learning something he hadn’t known before from a documentary. But in a way that just makes it better. The headline could, in fact, be rewritten to read ‘ROMAN LITERATURE TURNS OUT TO BE REALLY INTERESTING!!!’.

… along with a picture of Julius Caesar…

I laughed so hard at those that I spilled my tea.

In real life, my own week hasn’t been exactly peaceful. With six new student groups, plus various additional jobs, I’ve been teaching till late every night this week, to the point where I’ve lost my voice again (not good, since I have another tutorial in a couple of hours…). If I haven’t replied to your email yet, that’s why: I’ve built up quite a backlog (and if you ring me right now, I’ll only be able to croak down the phone!). However, this week has reminded me of how brilliant my job is. It’s been fabulous to meet so many new people excited about Classics, from all over the world. So a warm welcome to all my new readers – it’s great to have you here!

This week’s links from around the Classics Internet

Putin is Caesar now – The Independent

…covered in The Telegraph

Hecuba in Dublin – The Stage

Greeks and Mozart? – The Guardian

Geography in Herodotus and Thucydides – Histos

The beginning of coinage – Coin Week

What did the Mesopotamians do for us? – UnHerd

What did the Romans do for us? – Spectator USA

Who was Achilles? – The British Museum Blog

The rise and fall of Claudius – Nightlife

Into the Iron Age – History of the World