As you probably know if you follow this website, last weekend I went to see Stephen Fry’s first Mythos show, Gods, at The Sage Gateshead. I’d like to say that I made the choice to see that particular installment of his three-part show deliberately, because I was more interested in it than in the other two sections: but really it was just more convenient for childcare.

My choice was arbitrary: but ever since the show, I’ve been seeing the same myths  Stephen Fry was retelling, every time I switch on the TV or the computer. It’s starting to become creepy, like they’re following me…

One of the most striking features of the Gods show was its conclusion. Stephen Fry ended his session with the story of Prometheus’ punishment by Zeus. It was a dramatic ending, with an animated eagle swooping across the backdrop and finally plunging towards the audience, as the lights suddenly went out. So we all went away with the image of Prometheus and the eagle at the forefront of our minds: which made it particularly weird that the Prime Minister was filmed, less than two days later, retelling the same story to a rather bemused late-night audience…

The Brexit analogy was rather odd: but the storytelling element was perhaps even more unexpected, and clearly baffled some of Boris’ listeners. And then of course social media launched a flurry of counter-analogies, with some people suggesting that Boris should be cast as Epimetheus rather than Prometheus, and others speculating on what he stole to merit an eternal punishment. I love it when random people on Twitter start arguing about the nuances of myth – oh, and when the Daily Mail coverage includes a special information box to explain the myth.

But it wasn’t just Prometheus who was following me around: it was Arachne too. In the Gods show, Fry asks the audience – due to limited time – to choose just one of several myths for him to tell, and last Sunday the audience choice was Arachne. I was a bit disappointed in that (because I don’t think anybody tells the Arachne story as well as Ovid does), so it stuck with me. Imagine my surprise when ‘Arachne’ starts popping up on social media. The giant spider brooch worn by Lady Hale drew a great deal of attention this week, and led to lots of speculation about the message it was sending – and inevitably all of that spider speculation leads to Arachne. Since then, it feels like almost everyone I’ve talked to has mentioned it: some have even bought the t-shirt.

It’s not just those myths, either: all kinds of other myth-related stuff is swirling around in the media at the moment. For instance, we have the case of Greta Thunberg, who this week has been compared to both Cassandra and Atlas. Maybe it’s just me being very aware of it: but it seems that myth is creeping back into our social and political vocabularies. More and more, in public discourse and online, people are using it to defend themselves, to criticise others and to interpret other people’s actions.

There is a drawback, of course. Today we don’t have the same ease and confidence with myth that the Greeks and Romans did (which is why the Daily Mail feels the need to provide a fact box), and so a lot of the references come across as awkward, ill-fitting or just a bit pretentious. But as a culture, we seem to be learning rapidly. Stephen Fry, with his popular myth retellings, may be tapping into the spirit of the times in a way that I doubt he ever expected. It’s a strange way to come by a classical education – through politics and internet memes – but it’s certainly fascinating to watch!

Finally, a warm welcome to all the people who’ve ‘followed’ me this week! It’s my favourite time of year, because I get to meet so many new students from all over the world!

This week’s classical links from around the internet

Roman amphorae in a shipwreck – The Daily Mail

Books about debate – The Guardian

The owl of Athena – Coin Week

The art of growing asparagus – Latinitium

Classics and the performing arts – Society for Classical Studies

The eruption of Vesuvius – History Extra

The death of Augustus – Life of Caesar

The Temple of Vesta – When in Rome

The ideal life – The Mirror of Antiquity 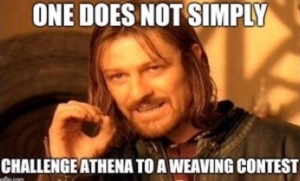 One thought on “Weekend Reading: The Ubiquity of Myth”