This week I was surprised to see one of my favourite books being discussed by Mary Beard on her TLS blog.

The book is a dinky little children’s Roman History volume, printed in London in 1798, and it has no text, just illustrations. It was made for Sunday schools, and the illustrations were available separately to be hung on walls. I picked up a copy of the book at some market or other, years ago (have I mentioned that I sometimes buy books…?). I remember spending a lot of time trying to match the illustrations to my (at the time) patchy knowledge of Roman Republican history – complicated by the fact that the illustrations are tiny and often a bit odd!

Anyway, the delight for me this week was that Prof Dame (or is it the other way around?) Beard linked in her blog to a companion volume, viewable online through the magic of Google Books, which actually explains the illustrations. I never knew this existed. At first I was just a bit disappointed – it takes all the fun out of guessing! But I’ve been looking through the two volumes this week, and giggling rather more than a card-carrying classicist can justify. The writer and designer, Mrs Trimmer (Sunday school founder, educational reformer, children’s literature critic and mother of 12), consistently out-moralises Livy to an extent that I didn’t think was possible. I’m still working my way through the books (there’s only so much moral improvement you can take in one day), but here are some excerpts for your entertainment…

In Mrs Trimmer’s hands the story of Tullia driving over the body of her father becomes a satisfying (if somewhat extreme) moral lesson for children:

‘This account of Tullia should be a warning to children not to give way to passion and pride in their early years, since they cannot tell what monsters they may in time become, if they do so’.

Livy couldn’t have put it more clearly himself!

But Mrs Trimmer and Livy don’t always see eye to eye. There’s another moral lesson drawn from the rape of Lucretia (who in this children’s retelling kills herself so that Sextus will not tell everybody that she is a wicked woman) – but it’s not quite the moral lesson Livy sets out to deliver. Mrs T. states firmly:

‘Had Lucretia been a Christian, she would have known that it was her duty to bear slander with patience; but heathens were brought up with very proud notions, and thought it was noble to kill themselves when they were unhappy.’

I was wondering how Mrs Trimmer would deal with the Roman pantheon, in a set of lessons written for a Christian Sunday school. As it turns out, she manages to dispose of the gods in one very long and masterly sentence, by casting almost all the blame for polytheism on poor Romulus.

‘Romulus forbade all arts and trades that were likely to promote luxury; and made excellent laws for the administration of justice; but, unhappily for him and his subjects, they were heathens, and supposed that there were a number of gods and goddesses, who were as whimsical and capricious as mortals; so instead of a holy worship, like that which Christians are taught to pay to the Creator of all things, Romulus required his people to practise such ridiculous ceremonies, as children now would laugh at; and these, with additional ones, were continued even when Rome was at the highest pitch of glory.’

I love this sentence. I know that my son, if told that people in the past did very silly things that children would laugh at today, would demand to be given details. Mrs T. knew how to hook an audience of kids!

Mucius Scaevola, however, (unlike Lucretia and Romulus) meets with Mrs Trimmer’s unqualified approval:

‘In times of danger, it is always best to summon up fortitude; for those who are known to be courageous are honoured even by their enemies, while cowards are despised by their very friends, even in their childhood.’

Ouch. As a parent, I can’t help feeling that using the example of Mucius sticking his hand into the flames as a lesson to children is just asking for trouble. (I read somewhere that when Nietzsche was a schoolboy he tried to prove the Mucius story true by demonstrating it to his classmates. I wonder if he’d been reading Mrs T…)

So now I have a new addition to my Fantasy Dinner Party guest list. I’ll be seating Mrs Trimmer next to Livy, and sitting back to watch the ultimate Exempla Take-Down. Will Livy win, with his stuffy and morally-upright Men Of Old? Or will Mrs T, with her Christians-vs-Heathens object lessons, manage to stun the great Roman moralist into silence? If I ever get my time machine, I’ll let you know…

Don’t dress as a centurion in Rome – The Guardian 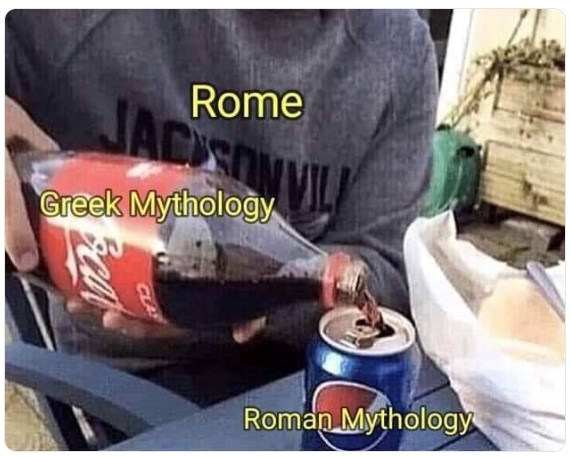 Colour and trade – History From Below

The oldest Greek prose – The Edithorial

Life as a museum curator – Panoply

A myth holiday – The History Girls

The sack of Rome by the Vandals – Nightlife