What caught my eye this week

This week I’ve been on holiday to Scotland – which is why this post is slightly more rushed than usual! One of the places we visited – due to having an engineer in the family – was the Falkirk Wheel.

While being raised up into the air and revolved in the manner of a rotisserie chicken, and while trying to distract myself from the unfortunate combination of fear of heights and motion sickness, I was pondering the classical connections of the place, and the ways in which those classical connections are consciously drawn upon.

There are two boats, run by the visitor centre, which take people up and down on the Wheel, and both have classical names. One of the boats is called Antonine. The name references the proximity of the Wheel to the Antonine Wall, but it also celebrates the relationship between engineering and heritage. Our guide informed us that the tunnel which leads from the top of the Wheel into the canal proper was itself a triumph of engineering, because it had to be carefully dug beneath the remains of the Roman Wall without disturbing them. So now the Antonine Boat sails under the Antonine Wall, proudly linking the achievements of today with the historical landscape. 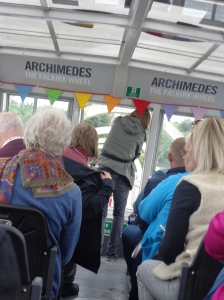 The other boat is named Archimedes, also for the engineering connection – although obviously this isn’t a regional association! A plaque in the kids’ water park sets out the scientific principles which paved the way for the invention of the Wheel, drawing on both Greek and Roman ideas about science and engineering.

The boats, the tunnel and the children’s playground all situate the Wheel within a context of scientific and engineering heritage, in a way which seems to be becoming increasingly common for visitor attractions. The Children’s Museum in Halifax, for instance, is called Eureka! (exclamation mark included), and features in its lobby a suspended statue of Archimedes, which is lowered at regular intervals into a bath filled with water (photo courtesy of last year’s summer holiday!).

If you’ve come across Classics on your summer holiday, do let me know in the Comments box below: I can’t be the only one who keeps encountering spurious holiday classicism!

From the archives: Considering a PhD? – Classical Studies Support

A Roman village in the Channel Islands – BBC

Why we should all read ancient poetry – The Millions

Thoughts on women and the rape of Persephone – Classical Wisdom Weekly

The putrid stench of purple – BBC

A Classical Reception analysis of The 100 – Antiquipop

What would Socrates say about translation? – Aesop’s Fox

On what museums ought to be – Everyday Orientalism

Collectors of artefacts – The Iris

Unravelling the enigma of ancient Greek music – The Conversation

Is rainfall linked to assassination? – The Economist

… with more in The Telegraph

Augustus and the power of pavements – Classical Wisdom Weekly

Daggers and Dinner – Giants of History

What’s up with Marathon anyway? – From the Desk of Glen

The ancient world at BBC 6Music – A Don’s Life

…and a further myth-based playlist – Eidolon

Free entry to museums in Greece for the full moon – Ekathimerini

Beds at the National Gallery – Hyperallergic