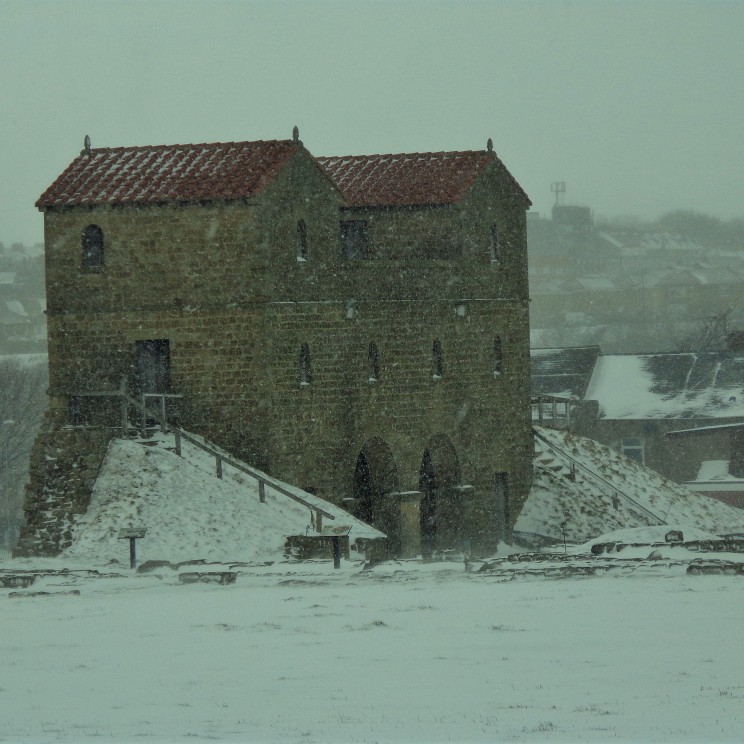 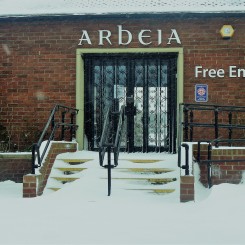 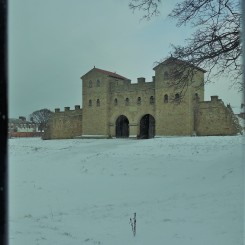 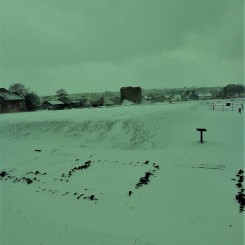 Today I’m looking out at a slate-grey sky and snow that’s streaking horizontally past the window. My feet are only just starting to thaw out, painfully, after surviving the school run (and yes, it was a run) in a blizzard. As always, I turn to the ancient world for sympathy: because the sensations of cold soggy feet and snow down the back of your neck are nothing new.

My first resort is Ovid, of course. Ovid knew what it was like to be cold and miserable, and as the most celebrated poet of his generation, nobody was better qualified to whinge about it. Tristia 3.10, part of Ovid’s extended lament about his exile to Tomis on the Black Sea, is one of his most eloquent rants about barbarian weather.

‘Snow falls…’ he begins, ‘nix iacet’ (literally ‘snow is lying’, but ‘snow falls’ may be more appropriate in the context of this line) …

Snow falls, and, once fallen, no rain or sunlight melts it,

since the north wind, freezing, makes it permanent.

Yes, we’ve had that this week in the north east of England: my route down the hill to the chip shop didn’t thaw last night, so today’s snow has made it almost too hazardous to chance. Almost…

The power of Aquilo’s northern gales is such

it razes high towers, and blows away the roofs.

Well, we’ve lost a couple of roof tiles, but the wind hasn’t yet razed the high towers of the pub at the top of the hill, so Ovid definitely has the edge on misery in that respect.

Men keep out the dreadful cold with sewn trousers

and furs: the face alone appears of the whole body.

Check: we’ve got that too, as long as tracksuit bottoms count as ‘sewn trousers’. Of course, round here the fashion is more for puffa jackets than for furs: but other than that, it’s just like being in Tomis.

and their beards gleam white with a coat of frost.

Ah – no, I haven’t seen any tinkling hair-icicles this week. But the aforementioned puffa jackets provide a strong defense against frozen hair, a defense unknown to the Sarmatian tribes of the Black Sea. I also haven’t noticed any frosty beards: but I have spotted a number of people kicking frosty cars that won’t start, so perhaps that’s the modern-day equivalent.

Wine stands exposed, holding the shape of the jar,

and they don’t drink draughts of mead, but frozen lumps.

I’m on my way to try this. If I leave my bottle of wine outside in the snow for a while, will it freeze? If frozen, will it be nice to eat? And is there any way of smashing the bottle off the outside of the frozen wine without smashing the frozen wine itself? Hours of fun, and a drinking game to boot. Thank you, Ovid: my evening is starting to look up!

So when you look out at the snow tomorrow, quote to yourself: nix iacet (Ovid, Tristia 3.10.14). Granted, you’ll be pointing out the obvious – but you’ll be doing it in literary Latin!

And for simply watching snow…